Stop Outside Meddling in Ukraine – The People Must Decide their Destiny 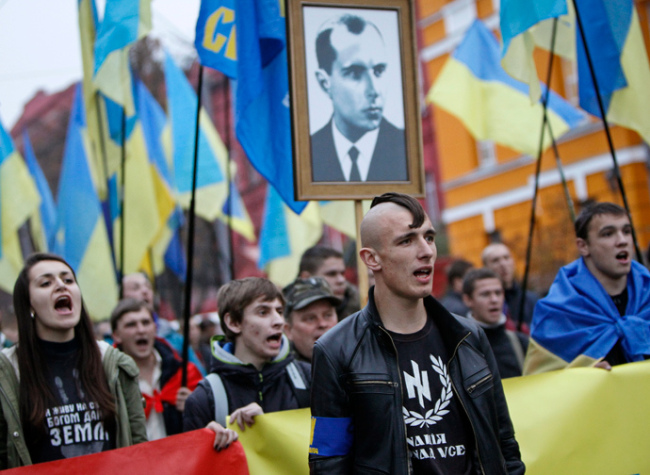 The Tudeh Party of Iran (TPI) views with grave concern the recent alarming developments in Ukraine. During the last few weeks the events have taken a very dangerous turn, threatening the stability of Ukraine with the real risk of the country being torn into pieces.

It is feared that the events might well have further repercussions in neighboring countries and in the wider region. The initial peaceful protests by Ukrainians against the failed policies of Yanukovych’s government have been ruthlessly manipulated and turned into a geopolitical confrontation between the EU and Russia. The early street demonstrations by the ordinary people were taken over by provocateurs and thugs and turned into violent deadly clashes that are now orchestrated by extreme right wing and fascist forces.
Although Viktor Yanukovych’s government was not representing the best interests of the Ukrainian working people, last week’s event was effectively an act of “regime change” by means of a coup d’état aimed at integrating Ukraine into the EU-Atlantic block’s sphere of domination. It is deeply worrying that the anti-government block includes fascist and neo-Nazi organizations, along with ultra-right wing parties such as “Svoboda” with clear anti-Semitic views. The rapid rise of ultra-right forces is now visible in cities across Ukraine, where the offices of the Communist Party of Ukraine and Jewish synagogues are attacked with impunity. It is notable that the main stream western media, commentators and politicians remain silent regarding not only the fair demands of the Ukrainian people for social justice, but also the growing political presence and influence of ultra-right bandits and their violent activities. There is a clear evidence of direct contacts made by German, Polish and US officials with various Ukrainian anti-democratic right-wing organisations, thus meddling in the internal affairs of Ukraine.
We have received news that the headquarters of the Communist Party of Ukraine in Kiev and in a number of other cities have been attacked and vandalised and that the residences of leaders of the CPU have been raided and fire bombed.
The use of cruise missiles, bombs, reactionary violent fundamentalist forces in the Middle East and dangerous, undemocratic, right-wing and fascist forces in Ukraine are all instruments of “regime change” for the proliferation of US-style “democracy and free-market”. They represent a well-established imperialist prescription for imposing economic and political dominance across the world.
The people of Ukraine suffer from a corrupt and failed capitalist system imposed on them following the collapse of USSR and they are now trapped in destructive cycle of confrontation between NATO powers attempting to encircle the Russian Federation and the government of Russia, which is resisting the erosion of its authority and influence over an area traditionally controlled by it.
The Tudeh Party of Iran strongly condemns and rejects the vicious meddling in the domestic affairs of Ukraine by imperialist powers.  Such attempts at destabilisation violate national sovereignty and the democratic rights of the Ukrainian people and are in violation of international law. At the same time the Tudeh Party of Iran condemns the violent attacks perpetrated by right-wing organisations against the Communist Party of Ukraine and other progressive political forces and activists in Ukraine. We reaffirm our solidarity with Ukraine’s working people, who are the direct victims of outside interference, in their struggle for social justice.

Central Committee of the Tudeh Party of Iran
25th February 2014