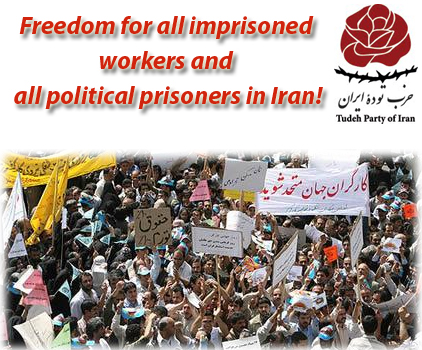 According to published reports, during the May Day celebration the security and repressive forces of the regime, in clear violation of the labour law and international standards, arrested a number of the country’s workers and trade union activists, and took them to detention centers.

The regime’s security forces attacked the labour activists, exactly at the same time of the president [Hassan Rouhani, claiming to lead a government “Prudence and Hope”] was deceptively making a speech on the pretext of “freedom to establish civil and grass root organisations and specialist labour associations so that the voice of workers could reach the official’s ears.”

The regime’s actions in recent days, including, not issuing a permit for “May 1st March” and the assault by the security apparatus agents, demonstrated that the ruling theocratic regime is not at all accepting the implementation of the International Conventions, and in fact the slogans following the 2013 June [presidential] election in relation to governance by “Prudence” and “Hope” were to deceive the public opinion.

Rouhani and supporters of the “Government of Tact and Hope” which speak out vigorously about the social liberties, cannot at all not to shoulder the responsibility for this calculated act of oppression. . They cannot justify this under the pretext   that the “extremist” forces  attempting to whip up tension in order to create difficulties for the president and the government.

Today, the leaders and trade union activists of “Busworkers Vahed Syndicate” were arrested without any justification – they were  only distributing [in public] sweets among their colleagues on the occasion of “International Labour Day”, the  workers greatest day of celebration in the world. Indeed, given all the existing restrictions imposed by the regime, the activists were at wrong and guilty of proclaiming their stance for ‘recognition of all trade union rights such as, freedom of association and demonstrations, to strike, and other forms of protest and an end to all repressions against trade union activists by the various shades of regime’s intelligence and security apparatus’ – they were [in effect]  demanding ‘releasing  of all those imprisoned defending labour rights and restoration of all their trampled liberties’.

Tudeh Party of Iran strongly condemns the assault and the detention of trade union activists by the theocratic regime’s security forces. We believe that the detention of labour activists two weeks after the cruel assault on political prisoners in the section 350 of Evin Prison are all calculated attempts by the  ruling dictatorship to prevent the spread and growth of the struggle by the  social forces in defending their social, economic  and political rights. Establishment of independent trade unions and syndicates is one of the fundamental democratic rights and freedoms. The world’s experience along with our country’s recent history vividly show that these people’s organizations in turn act as the most important  contingents fighting in defense of and to deepen freedoms, democracy and broadening of social justice in all society.

The Tudeh Party of Iran once again calls upon all [Iranian] progressive, democratic and patriotic forces to resolutely and unitedly defend the workers of our country. We believe that in the current conditions in which the trade union activists and forces are under attack by the repressive ruling dictatorial regime, adopting a passive stance or silence by any political force and personalities for any pretext is unacceptable. The demand for the immediate release of all the International Workers’ Day’s detainees and also all the other imprisoned labour activists in the country must be combined with effective and sustained struggle for the realisation of democracy – freedom and to be forced up the theocratic regime and its apologists.

Hand in hand all for elimination of poverty and deprivation, for realization of social justice, and to achieve trade union rights and intensification of struggle against the despotic theocratic regime.