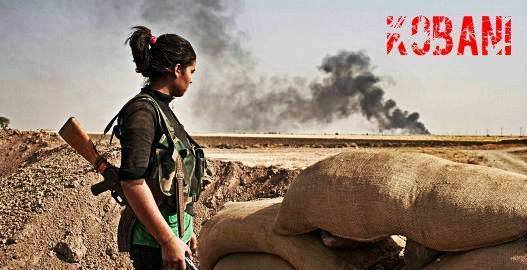 It has been almost four months since the brave people of the Kurdish city of Kobanê in the North Western Syria and close to that country’s borders with Turkey have been resisting- as real symbols of a popular struggle- the attacks and barbarism of ISIS. Kobanê is a small city, but the background of the tragedy which is taking place in this city, must be sought in the George Bush government’s policy of aggression and military invasion of Iraq in 2003; it exposes the inhumane logic and goals of the “humanitarian” interventions of imperialist countries in the Middle East region- a policy which is still pursued and implemented by the United States government in the framework of the “New Middle East” plan.

The struggle of the Kobanê people is not only against the ISIS’s professional murderers, but Kobanê is also indirectly under attack from the reactionary regimes in region, and is paying for their refusal to align themselves with the policies of the Turkish government and the Arab Kingdoms in the Persian Gulf, led by the United States, for toppling the ruling government in Syria. Over the past few years, the people of Kobanê have not cooperated with the global imperialism’s policy of “regime change” in Syria. By keeping their relative sovereignty and as an autonomous community, in which green shoots of popular democratic currents could be found, and while advancing the struggle for democracy and national rights, the Kobanê people had been opposing the United States’ plan for “regime change” in Syria. The tragedy taking place in Kobanê demonstrates how the popular movements in the Middle East have always come under attack from the reactionary and anti-people forces. Kobanê’s militant women and men are single-handedly fighting a struggle for the survival of their community against the attacks of one of the most reactionary and destructive forces, which has been borne out of imperialist policies of aggression, and nurtured by the local reactionary regimes. The role of women in the resistance movement of the people of Kobanê is significant and exemplary. The tragedy in Kobanê exposes the inhumane role of those who claim to be the “champions of democracy and human rights”, and above all, the United States and Britain that in recent years, by using various forces in the spectrum of the so called “political Islam”, directly or indirectly have destroyed the popular movements. Last week, the United Nation’s special envoy for Syria indicated that if Kobanê falls, a human tragedy will take place and thousands of citizens remaining in the city will be slaughtered by the “Islamic State”.
In spite of possessing extensive military capabilities and having positioned massive military forces a few hundred meters from Kobanê positions, the Islamic government of Turkey, an important NATO member, under Rajab Tayeb Erdogan’s leadership has taken no effective steps during the last few weeks to support the defenders of Kobanê and prevent their massacre. Erdogan, Turkey’s President, has blatantly stated that any kind of intervention from Turkish side against ISIS, will be conditional on the imposition of “no-fly” ban for Syrian air force; which in effect means approval of Turkish military activities in Syria. During the recent years, by keeping its borders open with Syria, Erdogan’s government has allowed the transportation and concentration of Salafist and Jihadist forces and ISIS terrorists through the border, and their bloody war against the Syrian government.
On October 2, the world’s media reported the United States Vice-President Joe Biden’s statement clearly indicating that the US allies, including Turkey, Saudi Arabia and United Arab Emirates have played an essential role in the creation and strengthening of ISIS by pouring billions of dollars of money, arms and equipment. Ironically, during the Turkish people’s nationwide protest on October 7th against the government’s inhumane policies, 22 people were killed and a large number of people were arrested by the security forces and militia forces belonging to the “Justice and Development Party”. It is also important to point out that in many Kurdish towns in Iran, the theocratic regime’s security forces repressed the Kurdish citizens’ rallies and prevented the people from expressing their solidarity with the Kobanê’s militants.
Even though at present the policies of imperialism in Syria and Iraq are somehow being faced by challenges on the side of the reactionary and anti-people forces created by the United States and its allies in the region, but one thing is certain that imperialism has never acted and will never act in the interests of the popular forces and popular movements. What is needed today is a global resolute and unified action of all progressive and humanitarian forces gathered around the United Nations. The way to save Kobanê is not through arming them or other Kurdish forces in the region by imperialist countries. We must prevent the spread of war and militarism in the region.
Tudeh Party of Iran calls for the immediate and direct involvement of the United Nation in equipping, facilitating and transfer of international peace-keeping forces (instead of NATO) for saving Kobanê, and replacing the NATO forces under American leadership by that of the United Nation’s.
Tudeh Party of Iran expresses its full and broad solidarity with the people of Kobanê and their struggle to defend and protecting their lives and homes and existence against the terrorism of ISIS.
Tudeh Party of Iran
Sunday, October 12, 2014

Forward towards “another alternative”

Statement of the Tudeh Party of Iran: On the dangerous manoeuvres and provocations of the US government in the Persian Gulf region! 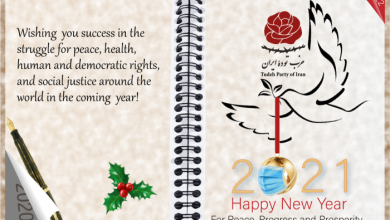 Revolutionary Greetings for the New Year