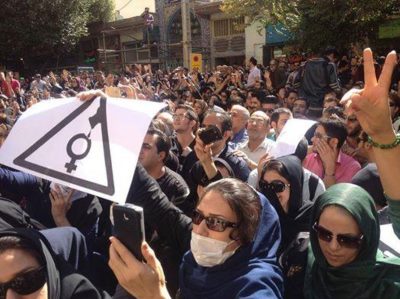 According to the media reports on 16th October 2014, serial acid attacks  on women in the city of Esfahan boiled peoples’ anger over, which led to a protest gathering in front of the Esfahan’s Prosecutor’s Office. As usual, the prosecutor and other officials at the provincial and national level tried to hide the connection between these crimes and their own reactionary social-cultural policies. They promised immediate investigation of these criminal activities and cries of “catch them”, “lock them” were raised from the mouthpiece of every state institute and officials’ mouth, in order to perhaps pour cold water on peoples’ blazing anger.

In ISNA (Iranian Students’ News Agency) report on October 18, entitled “Fall of Security in Half the World” (Esfahan was famously referred to as Half the World), and in interviews with victims of these crimes, the significant point is that all four female victims of these crimes were in their own vehicles, had “modest Islamic covers”, were speaking on their cell phones and were employed [in terms of appearance, these are all signs that are contrary to the reactionaries’ model of a woman]. In addition, none of these girls and women who were victims of this barbarism had any specific enmity in their personal lives, and all were targeted by “motorcyclists”.
The practical silence of Hassan Rouhani’s government of “prudence and hope” and also widespread media campaign of the ruling reactionaries against those who protested these inhumane actions, and arresting several people at the protest gatherings in Tehran and other cities, once again confirms the fact that in the theocratic regime of Iran the principle of oppression and trampling the basic rights of citizens is an inseparable and institutionalized nature of a regime which is willing and prepared to commit any crime in order to safeguard its survival. In line with this media blitz, on October 19 “Raja-News” website wrote, “All together it seems that as Ayatollah Larijani the head of the Judiciary, last week spoke of his special instruction/ decree to the prosecutor to deal with those media which are superficially trying to spread provocative news about economic corruption in the society, Judiciary must also get involved in this acid attack matter and prevent continuation of the suspicious media projects from disturbing society’s psychological security and spreading the counter revolution’s unfounded claims against the revolutionary forces and Islamic veil (hijab) in this regard.”
The barbaric attack on the rights of the women of our country who have been, and will be, a militant and relentless part of the social forces in the struggle against reaction and for freedom and reforms in our country, is by no means an accidental matter. Intimidating and forcing women to stay at home and surrender to the medieval ideas of a bunch of backward-thinking criminals who are controlling our country’s fate is one of the aims of such plots. In the minds of the regime, the refusal to submit to its medieval models for women is one of the sins of these women and girls. The timing of organizing these crimes, shortly after the remarks of some of the clergies and reactionary perpetrators and commanders of the “Ansar Hezbollah” (pro-regime organized pressure groups) about the need for “forbidding wrong”, and confronting the process of growing popular efforts for opening the social and cultural atmosphere of the society, by no means is accidental. In addition, it is the Iranian mothers, wives and sisters who are paying the price for factional fighting inside the theocratic regime.
In spite of all the malicious ploys specific to this reactionary regime, the women movement in our country will continue its struggle for achieving the true rights of the brave women and girls of Iran, including freedom and social safety.
While condemning these criminal acts, Tudeh Party of Iran demands the prosecution and punishment of the primary organizers perpetrators of the acid attacks on the nation’s women in recent days. Only with a widespread protest across the country and the world such inhumane acts of the security apparatus of the regime and its beneficiaries can be stopped.

Statement of the Tudeh Party of Iran: The expansion of the popular uprising against the ruling dictatorship, the regime’s petty “Supreme Leader”, and another bloody November!

Statement of the Tudeh Party of Iran: On the catastrophic fire in Evin Prison and the serious danger that threatens the lives of the political prisoners and prisoners of conscience