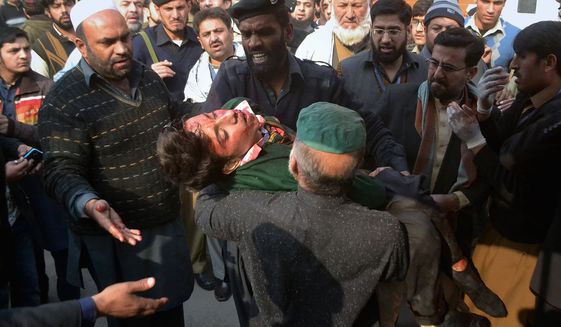 On Tuesday 16th of December, the band of Islamic terrorists who call themselves the ‘Pakistani Taleban’ created a humanitarian tragedy in an armed attack. The attack – perpetrated by the backward, criminal Islamic Taleban – on a school in Peshawar, left 141 people murdered, including 132 pupils and 9 teachers.

The spokesman for this criminal group claims that the forces which entered the school had orders not to harm the children and the operation’s objective was specifically to take revenge for attacks by the Pakistani army. This inhuman attack was of such magnitude that even another backward militia band which calls itself ‘Afghanistan’s Taleban’ was forced to express its revulsion in relation to this criminal murderous act committed against the children of the Peshawar school.
Since the start of the reign of the reactionary Islamists and in particular, since the military-Islamist dictatorship of General Zia ul Hag during the 1980s, Pakistan has been the arena of operation for extremist terrorist forces.  Many times Pakistani governments have stated that they will firmly deal with the Islamist militias but in practice they have either been unable or unwilling to carry it out. The reality is that the emergence of these kinds of Islamist criminals has not been accidental and, over the last three decades, they have been closely connected in various ways to Pakistan’s military and security forces.    The historic background to the emergence of these backward, anti-people forces must be seen in the destructive, interventionist policies of imperialism, together with the rule of local reactionaries in the region.
In recent years, examples of such inhuman tragedies, created by Islamist forces under the pretext of defending Islamic values, have been witnessed on a number of occasions in other countries such as Afghanistan, Iraq and Syria. These futile cycles of carnage and the massacring of innocents, the predominance of an atmosphere of terror and violence and the creation of fear in the region by criminal Islamist forces must be halted by the eradication their socioeconomic and political roots and hence their life-blood.
Legitimisation of these criminals, holding negotiations with them and awarding them concessions while they still adhere to their deadly reactionary and discriminatory outlook will only encourage them to perpetuate their inhumane acts.
The Tudeh Party of Iran, together with other progressive humanitarian forces in Pakistan and worldwide, expresses its deepest sympathy with the relatives of the victims’ of this tragedy at the Peshawar school and with the tormented people of our neighbouring country Pakistan. We strongly condemn this vicious attack.