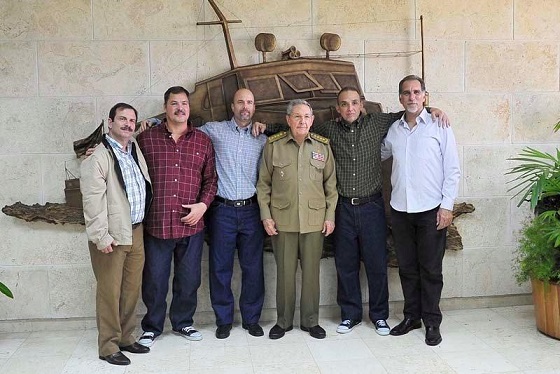 Tudeh Party of Iran expresses its most sincere greetings to the “Cuban 5” and for the liberation of the three Cuban patriots Antonio Guerrero, Gerardo Hernández and Ramón Labañino, who spent the last 16 years in the prisons of the United States.  The Cuban heroes, part of the internationally known “Cuban 5” now join their compatriots, René González and Fernando González who were released in October 2011 and February 2014, respectively, after serving their jail time.
The freedom of the “Cuban 5” is a massive victory for the relentless campaign by the Socialist Cuba, Cuban people and the wives and children and families of the detained patriots who never gave up hope of bringing them back home.

The liberation of the “Cuban 5” is also an important victory for the international campaign over the past 16 years for their release and for the US to end its illegal sanctions and to respect the Cuban sovereignty.  During these years the Tudeh Party of Iran, with other progressive organizations around the world, proudly campaigned, for the release of the “Cuban 5”.
The news of the liberation of the Cuban patriots was announced as part of the framework in which re-establishment diplomatic relations between the Socialist Cuba and the United States takes place.  In his speech from the White House, President Obama accepted that 50 years of isolating Cuba had not worked and “it was time for a new approach.”
Tudeh Party of Iran welcomes the restoration of diplomatic relations between the socialist Cuba and the U.S. and demands that all the sanctions and blockade against Cuba that have caused enormous human and economic damage to the people of Cuba be completely lifted. We hope that the recent and future changes to normalize the Cuba-U.S. relations will remove major hurdles on Cuba’s efforts to advance the socialist transformation in that nation.  Tudeh Party of Iran supports the historic demand of the closure of the illegal US military bases in the Guantanamo Bay, a part of the Cuban territory still under occupation after nearly six decades.
In celebrating the victory of the Socialist Cuba for successfully forcing the US administration to abandon its illegal policies and activities aimed against the socialist island – which is a victory for all those fighting in defence of their sovereignty – we call for all sanctions, provocations and intrigues against Cuba originated from the US or its allies to be stopped.
On these momentous days the Tudeh Party of Iran greets the Communist Party of Cuba and the Cuban people for defending, in the most difficult conditions imposed by US imperialism, their right to determine the course of their socialist future.
As comrade Raul Castro said in his message to the people of Cuba, the changes in diplomatic relations between that country and the US “…proves that it is possible to find solutions to many problems… We must learn the art of coexisting with our differences in a civilized manner.”
Long live the socialist Cuba
Long Live socialism
Long live international solidarity