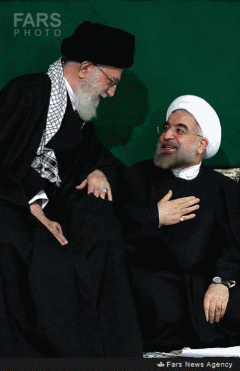 The political developments in the nation (Iran) during the past year have been accelerated and have found new dimensions. Extending the negotiations with the “5+1” states and the movement in the direction of achieving political agreements have been the news headlines in recent weeks. The move to establish new relations with the US and the EU in the framework of the so-called “heroic flexibility” of the Supreme religious Leader is accompanied with certain policies at home and in relation with the people’s movement, which cannot be easily ignored.

The regime leaders are well aware that the developments in its relations with imperialism would have certain implications. Hence they have defined their most important and urgent tasks to be the containment, control and suppression of the peoples’ movement in order to prevent the growth and expansion of the people’s weight on the political developments in the country. It is for this reason that the general policy accepted by all factions of the ruling regime is aimed at the destruction of all protest and popular actions that challenge its plans. It is for this reason that we have witnessed a wide spectrum of policies and reactions from the regime in order to spread fear in the society. These range from acid attacks on girls and women, the ratification of the repressive legislation to allow vigilantes to enforce “Islamic morality” in the society and increasing pressure on the social and labour activists.
In other words, the numerous and varied institutions that serve the regime, especially those institutions that are directly linked with the labour, women, youth and students movements, are implementing specific and carefully planned prescriptions that are aligned with the general policies of the ruling regime. Contrary to the regime’s deceitful propaganda, the factional conflicts and confrontations between regime’s internal factions take place within the carefully defined framework calculated by the regime. The regime has employed and is using all its possibilities in order that the capacity and potential of the people’s movement cannot grow and the range of its manoeuvrability and actions is not extended; as it was stated by Rouhani’s advisor, the objective is that “people turn from confrontation to confidence in the ballot box.”
The regime’s attempts to align and coordinate the slogans and policies of the main forces in the social movements, have exploited a mixture of force and deception offered by the claims of “moderation” and “policies of the government of prudence and hope”.   The regime’s leaders are banking on the chances of the present government to establish Iran’s relations with the West and the control and elimination of the people’s movement.  Khamenei’s position following the announcement of the extension of “5+1” negotiations, is the best proof of this point. With his calculated position, Khamenei, while (to deceive the public) portrayed the regime’s policy in nuclear negotiations as one from a position of strength, simultaneously sent a certain signal to the West, especially the US, to indicate his full support for all open and secret agreements between the regime and the US during the negotiations. Sending of this signal, which was met with positive reaction from imperialism, demonstrate that the Supreme religious Leader has a pivotal role in all policies pertaining to the resumption of relations with the West. In addition, the parliamentary vote of confidence for the appointment of the Minister of Science immediately after the announcement of the proposed extension of negotiations, indicating that the regime needs calm and quiet during the process of restoring relations with the West, is another solid proof of this fact.
Factional strife and struggles at the present stage, rather than being in the mode of confrontation, elimination or complete rejection, arise from the competition and confrontation for securing a bigger share and strengthening political and economic position of the factions and the centres of power. As a result, and on the basis of what was explained here, the regime in confrontation with the people’s movement and its main components, despite the differences in technique and styles of action, follows a general and comprehensive policy, and the responsibilities and tasks of the regime’s in relation to the movement and its social manifestations, are specified on the basis of this general comprehensive policy…
These policies must be tactfully and carefully confronted, exposed and neutralized. What is important for the popular and labour movements that form the backbones of the struggle for freedom is to make efforts to promote workers’ protest movement and rebuild the labour and trade union movement and strengthen its role in the popular movement for achieving social justice, freedom, peace, security and sovereignty and national independence. Exploiting all openings, opportunities and possibilities, while maintaining class consciousness and independence, is a priority in this sensitive stage that cannot be overlooked.