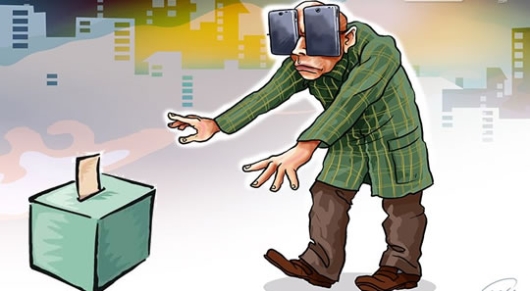 The elections of the Islamic Majlis (parliament) and the Assembly of Experts [of the Leadership] in Iran wrapped up with participation of about 60% of eligible voters. The mass media affiliated with the despotic regime and security apparatus claimed the 60% participation of the people in the elections as a positive response to Khamenei’s call [to vote] and allegiance of the people with the Islamic Regime, and the pro-reform media, too, claimed the victory of the reformists in both elections.

This kind of election in 2016 is not a new phenomenon in our country. This election, like other election shows in recent decades, was held by the reactionary regime in an organized and engineered manner in which the people could vote only for those candidates who had passed through the filters of the Guardian Council and the security apparatus of the Islamic Guard Corps (SEPAH). Disqualification of thousands of pro-reform and dissident candidates by the Guardian Council in recent weeks clearly showed that the regime neither believes in elections and people’s rights, nor does it allow that another “May 97” movement [when Khatami was elected as president] be born again.

It is clear that the outcome of such a theatre cannot be the election of true representatives of the people and the formation of a parliament that can be called the “house of the representatives of the nation”. In this election, what was sadly not heard or seen from the few reformist figures who were allowed to run was a concrete social-political plan to save the country from the current crisis and to move toward freedom and justice. Those who got elected for the Majlis (parliament) in the capital city Tehran and in other cities of the county were mainly figures affiliated with the forces supporting the “hope and moderation” government of Mr. Rouhani, and a faction of “moderate” fundamentalists under the leadership of Ali Larijani, the current Speaker of the parliament. In an interview with Shargh paper, Ali Shakouri-Raad, the General Secretary of the “Union of the Islamic Iran Nation Party” claimed that it seems that the circle of reformism has expanded so much that many fundamentalists fit in it too.

The core policy of “trust-building” with the ruling regime not only will not alleviate any of the scores of pain and suffering and adversity of the people, but also is an attempt to reconcile various faction of the regime with the goal of continuing the rule of a regime which is the root cause of the current disastrous situation in our country.

Inclusion of such criminal figures as Mohammad Rayshahri and Dori Najaf-Abadi, and reactionaries such as Emami Kashani and the defenders of the bloody suppression of June 2009 in the “List of Hope” of reformists, and campaigning for the election of these individuals, is a dark stain in the records of those who advertise themselves as the defenders of the peoples’ rights.

The message of both those who participated in this election and the millions of Iranians who chose not to take part in the election was a clear and bold expression of their deep antipathy toward the leadership of the theocratic regime and its repressive apparatus. In the February election, the people of our nation once again announced that they cannot come to terms with this way of governance and reject the political regime in which the right of people to free election is violated and trampled by intimidation and suppression and “discretionary supervision” [of the Guardian Council].

The slogans to move toward concession and reconciliation and communion of factions which we here these days not only are not in sync with the demands of the people, but also are in contrast to the core ideals of the reform movement to establish democracy in Iran. Not learning from the history and repeating such slogans and policies as “building trust” with the reactionary regime, which was the Achilles’ heel of the reform movement during the two terms of Presidency of Mr. Khatami and also during the 6th [reformist-dominated] Majlis will result in what we witness today: the continuance of the despotic regime of Supreme Leadership!

The result of the engineering of the “election” of June 2013, in which the reformists voted for Rouhani whom they knew was not from the reformist forces, was further retreat from the demands of the movement in the February election and encouraging the people to vote for such figures like Rayshahri and Dori Najaf-Abadi and Emami Kashani.

They say “once burned, twice shy”. Individuals like Hashemi Rafsanjani who could enter the Assembly of Experts today as the top representative from Tehran, not only is not, and will not be, the savior of our country from the claws of the reaction, but also himself is among the main architects of the current medieval regime toward which the people categorically expressed their disgust and revulsion.

The February election is over, but the struggle of the fed-up people against the oppression of the current rulers continues. The fight against the dictatorship and the process of transformation to a regime established based on the demands and wills of the people cannot be curbed and stopped. The harsh economic state of our nation continuously highlights the importance of intertwined relation between the struggle for political changes in favour of freedom, and economic changes for social justice.

The February election once again clearly showed that the people are not interested in reconciliation with the ruling reactionaries. The dictatorship could not be justified anymore with intellectual discourse. The future of our country depends on the organized and coordinated struggle of the people and the popular and progressive forces around a concrete plan to reject and dispose of the despotism and to establish freedoms and democratic rights.

The Central Committee of the Tudeh Party of Iran