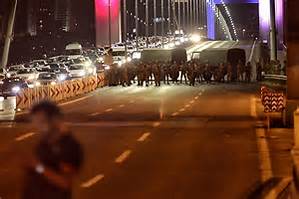 The adventurous operations, on the night of Friday 15 July, of part of the armed forces of the Turkey in an attempt to carry out a coup d’état against the government of the Justice and Development Party (AKP), and its aftershocks over the past three days have driven the country into a critical and dangerous situation.

Although the coup leaders claimed, in their initial statements on Friday, that they had taken over power and declared that the Islamist government led by Recep Tayyip Erdoğan, the President of Turkey, had been overthrown, subsequent media reports over the hours that followed indicated the defeat of the coup and the return of power to the government of the AKP.
According to the media reports, as a result of the attempted coup and the counter-coup of the Islamist forces, 265 people were killed, a large number were injured, and many thousands were arrested and jailed. Although only incomplete and contradicting information are available about the organisers of the coup and their intentions – and while the actions of the reactionary government of Erdoğan after the coup have raised many questions about the coup – what is certain and unquestionable is that during the coup and the shelling of some of the strategic targets, such as the parliament building in Ankara, many have lost their lives or have been injured. It should also be pointed out that during the first hours of Saturday morning [the next day after the coup] the forces loyal to Erdoğan launched a wave of intimidation and terror against the soldiers and military units of the army who had participated in the coup. Islamist mobs carrying firearms, knives, machetes and clubs responded to the calls of the mosques and took to the streets to beat up the young conscript soldiers who, frightened and shocked, had already dropped their weapons and taken off their uniforms to surrender. This was a clear indication of the fascist-like and vicious bent of the supporters of the AKP. The traumatic scenes in which frightened and crying young soldiers having surrendered were attacked with machetes, beaten up and stabbed  – and in at least one case beheaded – outraged and disgusted world public opinion, which rightfully condemned such barbaric acts.
After regaining the political power, Erdoğan hastily began a wide purge in the military, police and judicial system and removed many of his opponents from their positions, or arrested and jailed them. One day after the defeat of the coup, the autocrat President of Turkey blatantly called this defeat and the ensuing situation a “gift from God”. The curators of the mosques and Islamic centers in large cities of Turkey, including Ankara, Istanbul, and Izmir, have practically taken control of the power and are in effect ruling the country. Several reports have been released about the disappearance of political figures who oppose the current regime in Turkey. Many governors of regions across the country have been sacked and the government has banned close to 3 million public employees from travelling abroad until their connection to the coup perpetrators is investigated.
A surge of international criticism has emerged over the past two days, of the vengeful atmosphere that has taken a hold over the nation, and of the rise of suppression of the opposition forces in Turkey by the ruling Islamist government. Many believe that the failed coup of part of the armed forces is being exploited as a pretext to expedite the further Islamisation of power structures and to advance the plan to form an “Islamic Republic of Turkey” by the Islamists of the AKP.
The progressive opposition forces in Turkey, while strongly opposing the policies of the government of the Islamist AKP, have unambiguously condemned the coup by part of the armed forces. They have rightly argued that the taking of power by the armed forces of Turkey through the coup would have in fact damaged democracy and the rule of law more than before, and in the current tense and very complicated situation in the Middle East, could have driven the nation towards further turmoil and political instability.
In its first statement about the coup which was released on Saturday July 16th- the next day after the coup – the Communist Party, Turkey (TKP) categorically condemned the failed coup of the generals of the armed forces and at the same time strongly criticised the actions and track record of the Islamist government of the AKP. In its statement, the Turkish communists have called upon the advocates of peace, democracy, and justice around the world to bear in mind that “it is a lie that any of the sides in this conflict represents the interests of the people”, and “the only power that can overthrow AKP is the people’s power, there is no alternative to it.”
Based on the existing evidence, while it is clear that the Justice and Development Party (AKP) will try to exploit the coup as a pretext to purge the opposition, to strengthen its grip on power, and to move toward establishing an Islamic dictatorship, the friends of the people of Turkey must extend their solidarity with those who strive to deepen democracy, and must emphasise the unity of the nation and the working people in opposing sectarian conflicts. On Sunday July 17th, the Communist Party of Turkey held the plenary meeting of its Central Committee to discuss and make decisions about the fast pace developments of the post-coup days and to decide on the necessary approach for the situation.
The Tudeh Party of Iran unequivocally condemns the recent military coup in Turkey and, at the same time, expresses its grave concern about the suspension of the constitution and crack down on freedoms as well as violations of the democratic rights, mass arrests, and the attempts by the Islamist government to shut down democracy in Turkey. Our party deems the events of the recent days as a threat to peace and in conflict with the interests of the nations of the Middle East region. The Tudeh Party of Iran expresses its solidarity with the progressive and democratic forces, trade unions in Turkey, and the Communist Party, Turkey and supports their struggle to return democracy and rule of law to the country.