It is reported that the criminal theocratic regime in Iran has executed three political prisoners: Ramin Hossein Panahi, Loghman Moradi and Zanyar Moradi in Rajai Shahr prison, early on the morning of Saturday 7 September 2018). Fars News Agency, a mouthpiece of the regime’s repressive security system, confirmed the news and claimed the three “were members of the Komala group who had previous records as being security threats ….”

Zanyar and Loghman Moradi had been in custody with no family visitation rights and no contact with their lawyers over the last nine months. They were transferred to solitary confinement on Wednesday 5 September and their families were asked to go to Rajai Shahr prison in Karaj to visit them. Zanyar and Loghman Moradi have said they were tied down, flogged and threatened with rape. Their confessions to murder were extracted under torture. Ramin Hossein Panahi, who had been sentenced to death on charges of membership of the Kurdish Komala Party and acting against national security, was also in solitary confinement in Rajai Shahr prison. Recently, the UN Special Envoy on Human Rights in Iran, Javid Rahman, had expressed concerns over the threat of execution of these individuals and other Kurdish political prisoners in Rajai Shahr prison and called for the suspension of their sentences.

Contrary to the claims made by the regime’s repressive security forces regarding Ramin Hossein Panahi’s armed activities, his brother, Amjad – himself a Kurdish human rights activist – denies the allegations, stating: “My brother, who was a member of the Human Rights Defence Centre of Kurdistan, left Iran two years ago and became a member of Komala in Iraqi Kurdistan. He had returned to see our mother when she became ill and was detained […] Ramin Hossein Panahi was hung with a broken arm and whilst on hunger strike.”

While, in recent weeks, the progressive and liberal forces of the country remembered the 30th anniversary of the massacre of thousands of political prisoners in the 1988 National Catastrophe, and commemorated the memories of these people’s heroes, the execution of another group of political prisoners reaffirms the fact that the regime governing our homeland can only continue its existence with a violent and bloody onslaught on dissidents and that the murderous character of this ruthless regime is an integral feature of the ruling authorities.

The three Kurdish political prisoners were executed coinciding with a large-scale missile attack against the Kurdistan Democratic Party (KDP), and the Democratic Party of Iranian Kurdistan (KDPI), reported by international new agencies. According to the KDP; Karim Mahdavi, Ebrahim Ebrahimi, Nasrin Haddad and Rahman Pirouti, members of the Central Committee; Soheila Ghaderi and Hashem Azizi, permanent members of the Central Committee; together with four senior members and three Peshmergas of the Party, were killed in the missile attacks. In the following morning, the headquarters of the KDP and the “Training Centre” of the KDPI were also attacked in the largest Iranian assault on the Kurdish opposition for decades whilst the Central Committee of the KDP was holding its plenum. The Tudeh Party of Iran strongly condemns these oppressive and inhumane operations against the KDP and KDPI on Iraqi soil. These attacks are nothing but a clear military violation of the boarders of a neighbouring country.

The escalating deterioration of the economy and the rise in widespread popular protest against the oppression, corruption and destructive socio-economic policies of the supreme leader and his lackeys, have led the ruling regime to resort to increasing its use of violent and bloody oppression in order to maintain its power. It is significant that during the recent repressions we have witnessed the arrest of five lawyers and a women’s rights activist. It was reported that the two of the detained lawyers, Arash Keykhosravi and Payam Dorafshan, had been representing several political prisoners and families of victims of repression. Nasrin Sotoudeh; Mohammad Najafi; social network activists in the city of Isfahan; the families of university professor, Kavous Seyed-Emami, and of dervish, Mohamad Raji – both murdered in detention – were amongst the clients of the two lawyers.

Recent events, the growing crisis within the theocratic regime and the efforts of government leaders to maintain a bankrupt political system that continues to dominate the country by relying on the brutal and bloody repression of its citizens, is a sign of the extremely precarious and dangerous situation for our homeland. The inhumane sanctions imposed by the reactionary government of Donald Trump against the Iranian people, the interference of the reactionary and puppet Saudi regime and the meddling and unpopular racist government of Israel, together with the intensification of repression in Iran so as to stop the spread of popular protests and a repetition of the events of late-2017/ January 2018, has placed our country in a very difficult and sensitive position.

While condemning the execution of the Kurdish political prisoners by the supreme leader’s regime, and sympathising with the families and survivors of these prisoners, the Tudeh party of Iran condemns the massive military attacks against the political forces of the Kurdish people and urges all progressive and liberal forces of the world to protest against the murder of political prisoners and the dangerous military conflict on the Iran-Iraq border.

Once again, we call on all freedom-loving and patriotic forces of Iran to join in a united and common struggle to decisively reject the regime of the supreme leader.

The Central Committee of the Tudeh Party of Iran 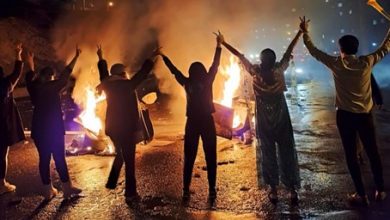 Tudeh Party of Iran: In support of the Iranian people’s movement for justice, peace, democracy, human and democratic rights, and national sovereignty