The news was delivered shortly and sharply… News agencies around the world reported that Mohammad Mehdi Karami and Mohammad Hosseini were executed by the Islamic Republic regime [in the early morning of Saturday 7 January 2023].  Mohammad Mehdi Karami and Mohammad Hosseini were two of the protesters that participated in the memorial marking the 40th day after the murder of Hadis Najafi.  They were both arrested in Karaj and subjected to brutal torture by the mercenaries of the security forces of the theocratic regime in Iran.  Sharifzadeh Ardakani, Mohammad Hosseini’s lawyer, had announced in late December, after meeting with his client, “I met Seyed Mohammad Hosseini in Karaj Prison.  What happened to him was cause only for tears.  From torture, beaten while blindfolded and with his hands and feet bound, from kicks to his head to the point he became unconscious, from [being beaten by] iron rods upon his soles, and from the firing of tasers upon various parts of his body.”

Karami and Hosseini’s interrogation and “trial” process – like all previous victims of the Islamic Republic’s oppression apparatus – not only failed to comply with the [basic] conventions and protocols of internationally agreed upon judicial due process, but clearly contravened all the laws of the country as well the rights enshrined in the Constitution of the Islamic Republic for defendants.  Holding such show trials presided over by individuals chosen by the Islamic Republic’s suppression apparatus further demonstrates the deeply anti-people and criminal nature of a state that continues to rule solely by resorting to violent and bloody crackdowns upon the rights of its citizens.

According to reports received from Iran, people in major cities – especially Tehran and Karaj – staged protests overnight [Saturday into Sunday] against the [continuing] repression and to protest the actions of the oppressive judiciary arm of the regime.

The execution of these two young workers – who belonged to the disenfranchised and marginalised sections of society – was carried out against the backdrop of the implementation of the [disastrous] socioeconomic programs of the Islamic Republic which have driven the lives of the working people and the disadvantaged in Iran into poverty.  Mohammad Mehdi Karami and Mohammad Hosseini, like tens of thousands of other young people, participated in nationwide protests against this poverty and misery and for a better life; a life free from poverty, class discrimination, gender discrimination, suppression, and repression.

In recent months, the Tudeh Party of Iran has organised a broad campaign against repression, the torture of thousands of detainees, and the risk of mass executions of protesters.  A joint statement issued in recent days on the initiative of our Party with the cooperation of a number of the world’s workers’ and communist parties reads: “We strongly denounce the use of the death penalty, particularly as punishment solely for engaging in peaceful protests and political activities and for exercising the right to free speech or freedom to join a political or social organisation of one’s choice.

“We support the legitimate struggle of the Iranian people for peace, human and democratic rights, sovereignty, and social justice.  Their struggle to determine the future of their country – free from any intimidation, oppression, or violence – is their legitimate right.  We call for the immediate and unconditional release of all detainees and an immediate halt to the torture and execution of protesters.”

The Tudeh Party of Iran, as it has repeatedly stated in recent weeks and months, calls upon all progressive forces and human rights organisations and international law institutions responsible around the world to do their utmost to pressure the authorities of the Islamic Republic of Iran to immediately halt this process [the court trials] by protesting the charade of these inhuman sham trials, in which defendants are deprived of any means to defend themselves.  The rule of execution, torture, silent death [forced disappearances], and the abduction of children from the arms of their families by this brutal regime should not be allowed to continue.  We cannot allow the lives, physically and emotionally, of political prisoners and prisoners of conscience to perish under captivity in the dungeons of this criminal and reactionary regime.  The Tudeh Party of Iran, which calls for the total abolition of the death penalty in the country, firmly condemns the Islamic Republic regime’s horrific crime in the proceeding with the executions of Mohammad Mehdi Karami and Mohammad Hosseini.

Once again, together with the militant and vigilant people of Iran,

Forward to plan and organise labour strikes and general strikes!

We wholeheartedly and passionately salute the heroic struggle of the people of Iran! 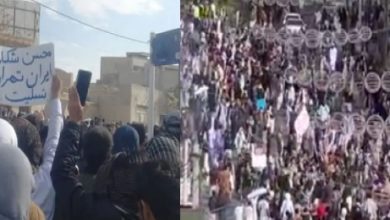